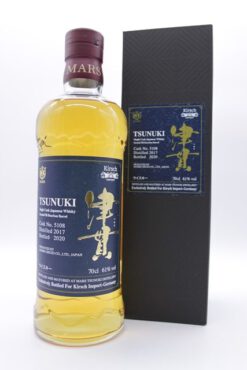 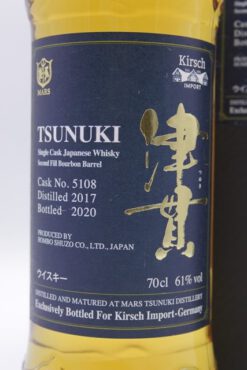 Two distilleries, three barrel storage facilities, one brand: Mars distills a wide variety of high-quality single and blended malts – in three different climate zones in Japan. Thanks to this combination, Mars succeeds in producing new whiskys again and again that will surprise connoisseurs in their complexity.

The Single Cask for Kirsch Import comes from the Tsunuki distillery and is the second bottling from this Mars branch after Tsunuki The First. In the subtropical south of Japan, distillates mature at temperatures of -2 ° C in winter up to 36 ° C, which shortens the maturation time. The single malt from the second fill bourbon barrel reached its aromatic maturity after only three years. Connoisseurs come with a cask strength of 61% vol. to the full enjoyment of the soft vanilla, crème brûlée, caramel and sandalwood flavors from the second fill bourbon barrel.

Mars whisky from Japan was produced by Hombo Shuzo Ltd. manufactured between 1985 and 1992. It has been in production again since 2011. The distillery is located in the village of Miyata at an altitude of about 800 meters. The low temperatures prevailing there ensure that the whiskey matures slowly.