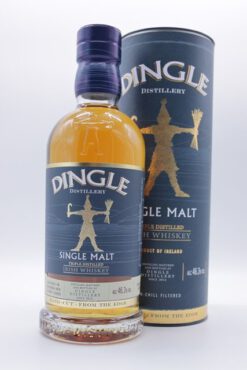 In the winter of 2012, a pioneering decision was made in the small town of Dingle on the Irish west coast: an independent distillery was founded. At one of the most westerly points in Europe, nothing extends beyond Dingle but the deep, seemingly endless Atlantic Ocean. Due to the proximity to the ocean, the distillery’s whiskeys ripen in a mild, maritime microclimate. The content of the embossed bottles speaks quietly and yet remarkably to the connoisseur’s palate. So far, Dingle experiences have only been available in the form of small batch releases. Now the Irish are releasing their first permanently available single malt Irish whiskey.

As usual for Dingle, the first bottling of the Core Range is the unadulterated result of proud handcraft in every step of the whiskey production. Slowly triple distilled in Forsyth’s still, the soft single malt matures in the ideal climate of the Dingle Peninsula to 69 percent in first fill PX sherry casks and 31 percent in first fill bourbon casks. The barrel combination results in a complex single malt with notes of lemon zest, mint and sweet pear on the nose. The creamy mouthfeel is carried by aromas such as caramelized apple, raisins and vanilla, which merge into a honey-sweet finish with lingering spice.

This whiskey comes from the Dingle distillery, the westernmost distillery in Europe. Whiskey has mainly been produced there since 2012.