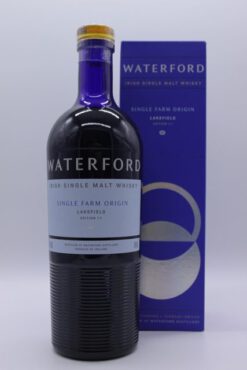 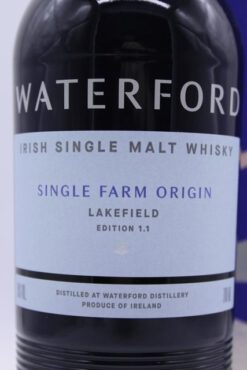 More sheltered, in the lee of Bishopswood, the Lakefield Farm stands on undulating lowland terroir with well-drained, deep clay soils. The land is farmed by Seamus Duggan, winner of the Waterford Trophy for Barley Breeder of the Year 2019. The barley of exceptional quality is the distillation base for Lakefield: Edition 1.1, a soft single malt with notes of rhubarb and freshly baked apple pie.

Tasting Notes:
Nose: Warm pudding and freshly baked bread combine with red apple, milk chocolate and dried flowers. In addition: buttercream and pine needles.
Palate: Gentle notes of clove go together with a nice note of pepper to bread and malt biscuits, then to honeydew melon and pears.
Echo: “It doesn’t, it meanders along like a tributary to the start of a great river.”

“For years, people have been given a wide variety of explanations for the supposedly true quality of whiskey – from stills to water to wood. We want to show what makes malt whiskey the most complex spirit in the world, what is the real source of its extraordinary taste: barley. ”

For Mark Reynier and his team, 100 percent Irish barley is the focus of the taste and the center of all attention. Sure, because the Waterford CEO acquired the facility on the banks of the River Suir in 2014 with a very specific goal: to make Waterford the epicenter for the radical implementation of the terroir philosophy known from the world of winegrowing. In the course of his legendary career in the wine and whiskey industry, which spanned more than 40 years, for Mark Reynier an insight became deeper and deeper: How and where barley grows significantly influences the complex aromas of malt whiskey. It grows differently in each field. Soil composition, sun exposure, location and much more lead to a different taste profile with every harvest, at every location. The barley terroir hides the secret of truly unique whiskeys. Each bottling of the Waterford Distillery explores a different location in the focus region for barley cultivation. Terroir for Terroir, the exclusive Irish single malts taste represent their place of origin. In addition to selected first-fill oak barrels, long fermentation and slow distillation in the two in-house pot stills, Waterford’s cradle lies in the cooperation with more than 40 regional farms. When handling their barley, Reynier and Co. follow a strict methodology from winegrowing: The grain is grown, stored, malted and distilled separately. Farm by farm, harvest by harvest, the Waterford whiskey captures the consistently authentic taste of Irish single malts. A printed terroir code reveals exactly where the contents of each bottle come from. Around 21,580 data points per distillation in the company’s highly developed logistics system open up single malt lovers to an extensive world with information on their place of origin, barley farmers or the distillery itself. All that is required is to enter the code on the website or in the future in the specially developed app . For Mark Reynier, this kind of traceable, 100 percent transparent terroir-based Irish whiskey is a dream come true: “I have spent a lifetime in the higher segment of the beverage industry – half wine and half single malt – and Waterford is the highlight this rather unusual journey. It’s rare to have the chance to breathe life into such a provocative concept. ”The ultimate goal of the distillery: to create a deep, unique whiskey that is unique in the world. This is created in the composition of the individual “Single Origin” malts, of which Waterford has now launched the first two bottlings in a limited edition.