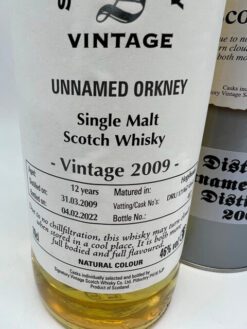 Which of the two active distilleries is responsible for the slightly smoky Unnamed Orkney 2009/2022 remains Signatory’s secret. What is not secret are the facts about the full-bodied vintage bottling – such as the maturation in hogsheads #3 and #4.

As an independent bottler of various Scotch whiskies, Signatory has been selling exclusive cask bottlings under its own name since 1988, thus giving many fans access to brands that do not publish bottlings under their own logo. The company’s own warehouse with well over 10,000 casks still contains a stock of casks from some distilleries that are either already closed or have been so popular for years that they no longer sell casks to independent bottlers. Some of these distilleries have had such strong demand from whisky enthusiasts for some years that many bottlings are now published without an age statement, as the old stock simply does not have the required capacity. It is different with Signatory: Each bottling contains information about the distillation and bottling date, the barrel and bottle number, the type of cask and the fact whether it has been chill-filtered. All bottlings basically correspond to their own color and have not been treated with sugar couleur. Some bottlings not only consist of one cask, but a marriage of two casks, rarely three to four. The casks are selected by hand and bottled in their own facility.