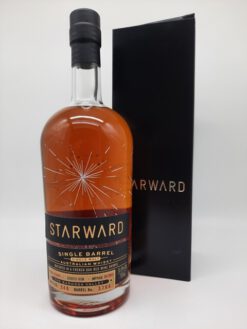 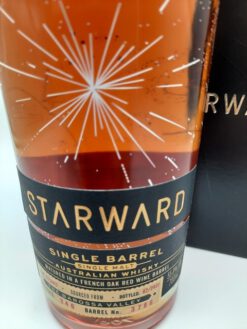 Single cask alert from Australia: Starward Distilley presents another delicacy from the single cask with the Single Barrel 2017/2021. For this, the progressive Melbourne-based company aged its tropical-fruity raw spirit in a former red wine cask. Starward always fills “New Make” with a lower alcohol content in the wine-soaked barrels. In this way, they release all the more fruit notes and tannins into the whisky. The current single barrel made of French oak previously contained red wine from the Barossa Valley. This oldest wine region in Australia is known worldwide for its opulent wines, which are characterised by the heat of South Australia.

Combined with Starward’s raw spirit, the result is a seductive potpourri in which red apple and strawberries provide the fruit component and dark chocolate contributes a tart sweetness. The round mix can unfold uninhibitedly at 55.8% vol. Cask Strength, the round mix can unfold uninhibitedly. The Starward Single Barrel needs only 3 years for its enticing profile. That’s enough, because in the stubborn Melbourne climate, the so-called “four seasons in a day”, the whisky interacts intensively with the wood and in just a short time gives rise to flavour-intensive single malt that you won’t find anywhere else.

Melbourne – the pleasure metropolis of Australia. A young and innovative food and bar scene animates the city on the southeast coast of the continent. Inspired by her, the Starward Distillery produces a whisky that is completely new for Australia, which focuses on the pleasure experience, turns its back on conventions – and simply allows everything that pleases and tastes. For example the enjoyment of single malt and Co. for a BBQ with friends, with a thriller on the couch, with pizza or banana bread.

Freed from tradition, the distillery looks at whisky through the eyes of brewers and winemakers. It is made exclusively from ingredients from the region. In addition to barley, mainly from slightly charred or steamed red wine barrels from Australian wineries. Starward Whisky only needs three years in them for its fruity maturity. Responsible for this: the Melbourne climate. Constant changes in weather, the so-called “Four seasons in a day” at an average of up to 22.5 ° C, allow distillates to ripen in an elementary way – and create a whisky that cannot be found anywhere else.