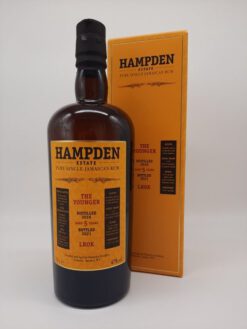 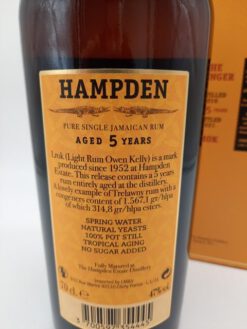 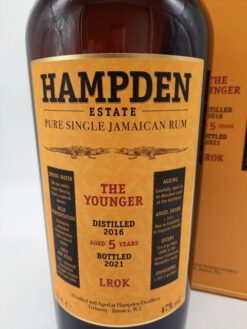 With its 5-year maturation period, the rum shows a new side of the distillery. Hampden 2016 LROK The Younger combines the aromatic intensity of tropical maturation with the freshness of a young rum. With an ester content of 314.8 g/hlpa and an overall high proportion of flavour-bearing congeners, exotic aromas unfold from mango to fresh pineapple juice and orange peel to cloves.

At Hampden, fermentation is like a dream for anyone who can grasp the magic and mystery of this process that can transform flour into bread, grapes into wine and fermented sugarcane into rum. Alcoholic fermentation lasts between 8 and 15 days and takes place in truncated cone-shaped wooden vats whose slats speak of the passing of time. This happens thanks to the wild yeasts that live and reproduce in the fermentation rooms.About esters, the Hampden Estate distillery has perpetuated a method over the centuries and passed it on tothe last two surviving distilleries which continue using it. The process of producing high ester rum is highly complicated, and it’s astonishing to think it was developed in a time before modern science, relying only on empirical research and without chromatography etc. Since the late 18th century, Trelawny rums have always obtained the highest prices on the world market.

Clear, not matured in a barrel and high-proof: Overproof Rum is by far the most consumed rum in Jamaica. The spirit is just as strong as it is rich in aromas and on this side of the world is particularly popular as a complex cocktail ingredient. The pure enjoyment of Overproof Rum can overwhelm the palate – although high-quality bottlings such as Rum Fire from Hampden Estate represent a special drinking experience for experienced connoisseurs. Rum Fire is the iconic white overproof brand of the traditional Hampden Estate distillery – inspired by the traditional practice of proving the strength of a spirit by lighting it up. Originally created for the local market, the high-ester white rum has also gained a large following outside of Jamaica. The 63% distillate is now available in Germany. Rum Fire is based on molasses and goes through fermentation with wild yeast, which gives all rums from Hampden Estate their celebrated “funky” flavor profile. The strong tropical aromas of the Blancos are deepened by the distillation in the pot still, so that an amazingly intense overproof rum is created that gives cocktails real depth.