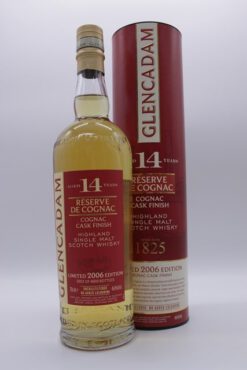 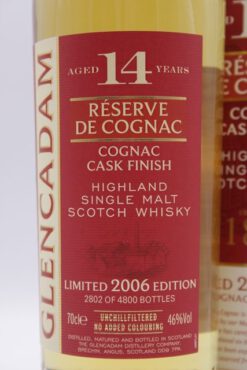 The Glencadam Réserve de Cognac 14 y. o comes from the hand of the master distiller. In 2006 he masterfully married distilled single malt from handpicked bourbon barrels in order to age it in cognac barrels. The “Charentais Casks” made from French Limousin oak give Glencadams single malt additional depth and complexity, which is expressed in notes such as peanut brittle, lemon oil and cigar flavor.

The small distillery in the town of Brechin in the Eastern Highlands has existed since 1825. However, Glencadam only launched its own single malt about 15 years ago. As a “hidden gem”, the distillery has since built a solid fan base and expanded its range to include 10 to 25 year old single malts and single cask bottlings. These are created just like when Glencadam was founded: traditionally, with attention to detail – and the famous spring water from the Moorans Mountains, which gives Glencadam whiskey its creaminess.

The latter is shown very well by the unusually mild Glencadam Origin 1825, a palatable single malt for beginners – into the whiskey as well as the Glencadam world. The creaminess of the highland malt also harmonizes perfectly with the Andalusian temperament and creates full-bodied bottlings such as the Glencadam Reserva Andalucía. All single malts with age information are 46% vol. bottled and are neither chill-filtered nor colored in order to preserve all flavor components for an authentic experience.