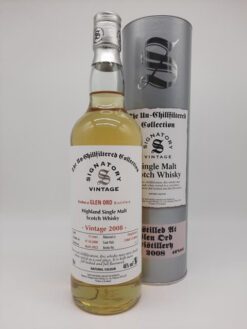 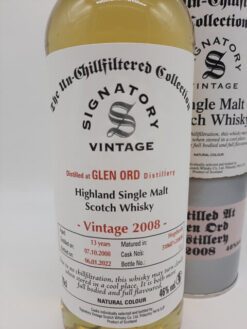 It produces up to 11 million liters per year, but independent bottlings from this distillery are rare: Glen Ord. Located north of Inverness on the Black Isle peninsula, the distillery, which officially opened in 1838, is at home in what is perhaps Scotland’s best growing region for barley. Glen Ord is one of the few distilleries that still processes this in its own malting house.
Discerning connoisseurs can now convince themselves of the mostly mild, malty-sweet result with a bottling of the Signatory Un-Chillfiltered Collection. The Glen Ord 2008/2022 matured in two hogsheads for 13 years. Despite the comparatively low drinking strength of 46% vol. not chill-filtered, the Highland Single Malt offers a full body and full aroma for intense moments of pleasure.

Glen Ord is located just outside Inverness in the valley of the Oran on Muir of Ord, where there were once 9 distilleries. What remains is the Ord Distillery, founded in 1838, which had to endure numerous name changes in the past; at times the whisky was also called Glen Oran, Ord, Ordie and Glenordie. The water of the distillery, which belongs to the region of the Northern Highlands, comes from Loch Nam Bonnach and Loch Nam Euan. Glen Ord has had 6 stills since 1966 and is now one of Diageo’s Classic Malts.