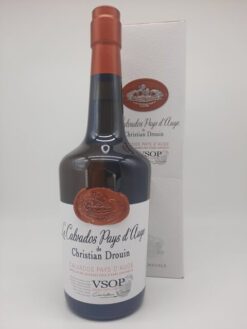 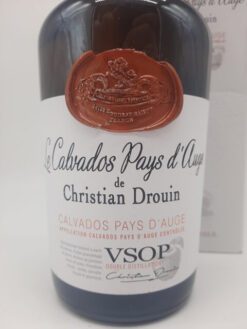 Aged in (strong) wine barrels, it offers sensual fruity notes and aromas of ripe apples that combine full-bodiedness and elegance.

A quarter of an hour’s drive from Deauville in Normandy, time has stood still. Along a gravel path, the green valley landscape of the Touques river opens up into a half-timbered dream. The picturesque 17th century estate is the home of Calvados Christian Drouin. Tradition is not just a façade here – the family business is an institution. In the third generation and using traditional working methods, the Drouins process a raw material for which the entire region is famous: the apple.

More than 30 different apple varieties thrive in the family’s orchards. Whether bitter, sweet, bittersweet or sour: all apples from the high trunk trees are of organic quality. When they fall to the ground fully ripe between September and December, they are refined into spirits, for which the house has been honoured with over 200 gold medals.

With an extensive collection of vintage calvados dating back to 1939, the House of Drouin is the Gordon & MacPhail of the calvados industry. The apple brandy from Normandy is produced by double pot still distillation of cider, i.e. fermented apple must. The later the distillation process starts after the harvest (sometimes not until the following autumn), the greater the ageing potential of Calvados as well as the possibility of producing long matured vintages – the Drouins’ speciality.