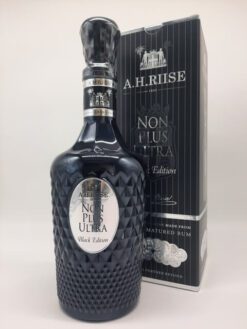 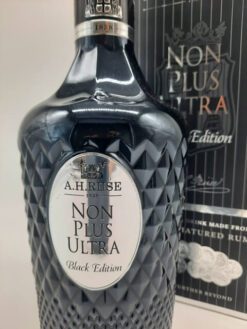 The expression “Non Plus Ultra” is a saying that, according to tradition, was attached to the Pillars of Heracles in Roman mythology to mark the end of the world at the exit of the Mediterranean Sea between Gibraltar and North Africa. Non Plus Ultra (Latin translation No Further), served as a warning to sailors not to continue their journey beyond this point into the unknown world.
This rum explicitly pays tribute to the term “Non Plus Ultra”, which can also be loosely translated as “the best” or even “nothing better follows”. Thus, only the very best and oldest rum barrels from A.H. Riise are selected for this rum. “Non Plus Ultra Black” is blended by hand by the master distiller. Each barrel in the final blend has been personally selected.
The Black Edition matured in particularly heavily charred oak barrels, which gave the rum its complex aromas and dark colour. Only 10,000 bottles are produced per year.

May contain traces of walnut

Albert Heinrich Riise was a Danish pharmacist and botanist. He lived from 1810 to 1882.

He began to sell rum at the time he was at the west indian islands as a pharmacist. His rum was exportet to a lot of countries and was very succesfull in Denmark.